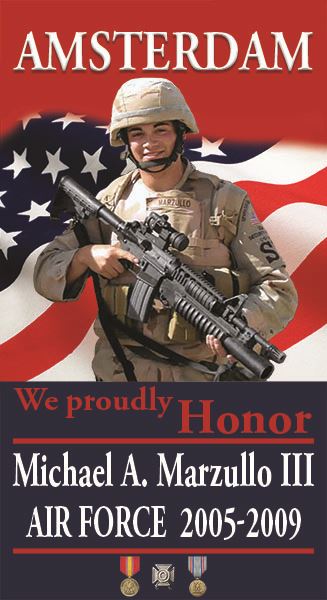 Senior Airman Michael A. Marzullo III is a native of Amsterdam, NY who enlisted active duty in the world’s greatest Air Force in 2005 following his graduation from Amsterdam High School. SrA Marzullo protected us from home and overseas when he served a tour of duty in support of Operation Enduring Freedom in Kandahar, Afghanistan in 2007. Stateside, SrA Marzullo was stationed at Andrews Air Force Base outside of Washington DC. He worked as a Security Forces Officer and was a part-time student at the University of Maryland. During his time at Andrews, SrA Marzullo was assigned to the 316th Security Forces Squadron, supporting the Special Aircraft Mission as a Security Response Team Leader and Pathfinder Airfield Entry Surveillance operator. SrA Marzullo provided safeguard to Air Force Protection Level 1 Resources, including Air Force One, Air Force Two and other Special AirMission aircraft. In addition, SrA Marzullo supported the United States Secret Service on protective detail movements for POTUS/VPOTUS/FLOTUS and foreign heads of state. One of his most memorable experiences from his time in the service was receiving President George W. Bush’s uneaten Chicken Parmesan on post following the President’s arrival to the base from an overseas trip. In 2009, Michael returned to his hometown of Amsterdam to continue his education, obtaining a bachelor’s degree in Criminal Justice from the University at Albany. Michael continues to serve the public as an investigator for the New York State Justice Center, helping provide justice and protection for individuals with special needs from abuse and neglect. Michael lives in Saratoga with his beautiful wife Stacy and three children.