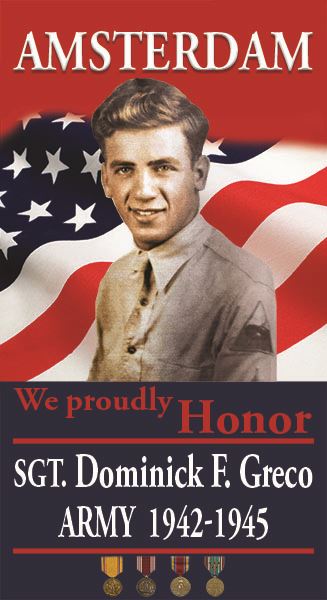 Sgt. Dominick F. Greco served in the U.S. Army from 1942 to 1945 in France, Germany, Belgium, and Czechoslovakia. In one of the most pivotal points in world history, brave men like Dominick put their lives on the line to defend the free world, and save millions of lives from tyranny and oppression. During his time overseas, he served in the 471st Ordnance Evacuation Company. He drove an MM-25 tank retriever, (also known as the Dragon Wagon), a specialized tow truck used to bring damaged tanks back from the battlefield. This job required him and his brave team to go to the front lines of many battles to recover this precious wartime equipment. Moving hundreds of tons of American steel along the thin, war-torn streets of Europe was no easy task. One time, a low clearance bridge required them to deflate all the tires on the truck, providing just enough clearance to allow them to pass under it. He fought in the following Campaigns of the European Theatre: Ardennes, Central Europe, Normandy, Northern France, and Rhineland. He was very proud of his service to the United States of America. He always kept in contact with and attended reunions for his Division throughout the years. After the war, he was a plumber and a member of the Plumber/Pipefitters Union. For 21 years, he and his wife, Jessie, owned and operated Greco's Bakery. Dominick had a very strong work ethic, had great pride in this amazing country, and he forged a path for his three children allowing them to continue his American dream. He never really retired. When he was in his 80s he worked part-time at Amsterdam Memorial Hospital. Living into his 90s, he spent his later years in his workshop making wooden furniture and trinkets and spending time with his grandchildren. There isn’t a shadow of a doubt that this man truly embodied the spirit, grit, and opportunity provided by “the greatest generation.”