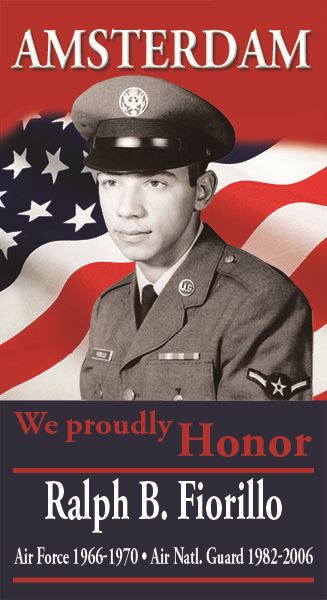 Ralph B. Fiorillo has been a lifelong resident of Amsterdam. On May 17th,1946 he was the second born of ten children. He graduated from Wilbur H. Lynch High School in 1965. He began working at General Electric in Schenectady before enlisting in the Air Force in September of 1966. He attended Basic Training at Lackland Air Force Base in San Antonio Texas. He continued to train at Travis Air Force Base in Fairfield, California as a parachute rigger for combat operations. He was then deployed to the Vietnam War where he was stationed at Camrhan Bay Air Force Base. He served as combat transportation and a parachute rigger during his tour in Vietnam. After returning from Vietnam, he then continued as a Buck Sergeant at McGuire Air Force Base in Wrights Town, NJ before finishing his enlistment in 1970. Ralph then continued his career at General Electric, where he worked as a crane rigger, maintenance, and turbine assembler for the next 33 years before retiring in 2003. In July of 1982, Ralph decided to enlist in the Air National Guard serving at the 109th Air National Guard Stratton Air Force Base in Glenville, NY. He served in the Guard as a parachute rigger and cargo transporter, achieving the rank of Master Sergeant before retiring in May of 2006. Throughout the years, Ralph continued to be a resident of Amsterdam, settling on the Southside after marrying his wife Bernadette in June of 1971. They have been married for over 49 years, through which they raised four children, three daughters, and a son. Ralph’s family has grown over the years. One of his greatest joys is spending time with his four grandsons, seven granddaughters, and one great-grandson. Ralph also likes to spend his days gardening, bowling, playing bocce, and hunting. However, he will most likely be found lending a helping hand to one of his children, grandchildren, or siblings.