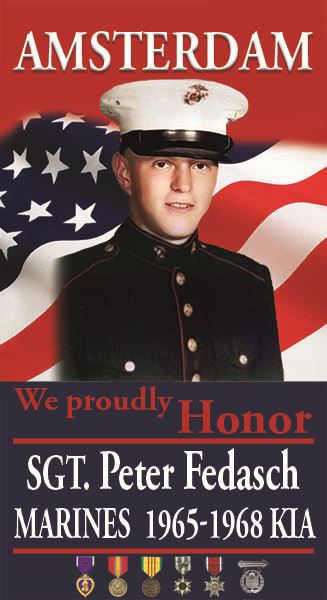 Sgt. Peter Fedasch was the son of Maria and Theodore Fedasch and brother to Jerry and Michael Fedasch of Amsterdam, NY. He was a 1965 graduate of Wilbur H. Lynch High School and after graduation, he enlisted in the United States Marine Corps. Peter had the rank of Sergeant and his specialty was Rifleman. During his tour of duty in Vietnam, he was assigned to India Co., 3rd Battalion, 9th Marine Regiment, and 3rd Marine Division. Sgt. Fedasch saw action in campaigns in Con Thien, Dang Ha, and Quang Tri. He sustained a fragment wound to the arm in 1967. He was treated in the field and returned to duty. On June 29, 1968, Sgt. Fedasch was at the Khe Sanh Combat Base with India Company during Operation Scotland II, when the base had hostile incoming artillery/rocket fire he was killed in action, one day after his 21st birthday. Peter's body was returned home and he is buried in St. Nicholas' Ukrainian Catholic Cemetery, Amsterdam, NY. Sgt. Fedasch was awarded two Purple Heart Medals along with other service medals.