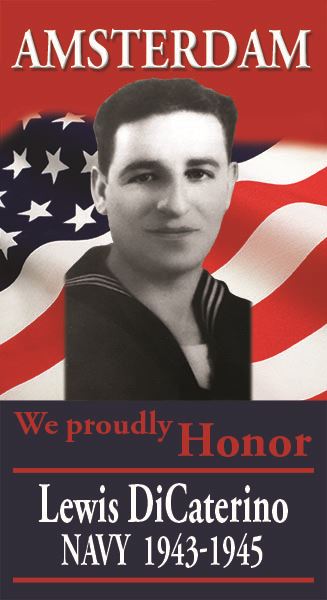 Lewis DiCaterino was born and raised on Amsterdam's South Side within a family of ten children. He married Connie Traczyk in 1940. They had their first child in 1942 and shortly after, Lew joined the U.S. Navy to fight in WWII. He obtained the rank of Petty Officer Second Class while serving in the Pacific Theater on the USS Miami. He was awarded six battle stars. While away at war, Lew's youngest brother Ralph died in battle, and shortly after, Lew also had to bear the loss of his mother. Upon his return, Lew began a career with General Electric where he worked as a crane repairman and shop steward. Through their 65-year marriage, he and Connie raised a family of four children and also provided childcare for their four grandchildren. Their life was always family-centered and they loved to host family parties and Sunday Suppers. They also loved to travel and Lew enjoyed working in his large garden. Throughout his life, Lew was a patriot and was proud to have served his country he passed away on Flag Day at the age of 88.