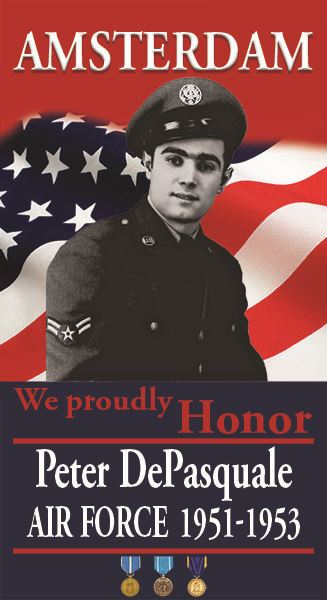 Peter DePasquale was born in Amsterdam, New York in 1931 to Nancy and Onofrio DePasquale, both of Sicilian descent, who raised him and two siblings (Joseph and Catherine) on Jay Street. As a teenager, Peter worked as an usher at the Rialto Theater before graduating from Wilbur Lynch High School in 1950. Peter lived a life of service, driven by steadfast values of love and loyalty. As the Korean conflict intensified, Peter's love of country called him to enlist in March 1951 with his best friends, rather than wait to be drafted. He completed basic training at Sampson Air Force Base in Geneva, New York before deployment to Korea. He served as a cook with the 3540th Motor Vehicle Squadron of the U.S. Air Force until October 1953, when he received an honorable discharge. He was awarded the Korean Service Medal, the U.N. Service Medal, and a Presidential Unit Citation, a citation awarded for extraordinary heroism in action against an armed enemy. Upon his return to Amsterdam, he married the love of his life, Martha Delores Kowalczyk, in 1956, and Peter's guiding principle of service carried him through the next seven decades. Peter, a proud Teamster, served his community as a truck driver for more than 40 years. He began by transporting produce from New York City twice a week in his early years, then driving a dairy truck for Olybrych's Dairy, then Boss-Linco Lines, and finally St. Johnsbury Trucking Company until his retirement in 1993. At the center of his heart was his dedication to his family. His driving career never took him away from home overnight. On the weekends and during the summers, he drove his wife and four daughters to new places throughout New York State, the Northeast, and the Eastern seaboard. Peter's service also extended to the warmth he bestowed on any visitor to his home. Anyone who entered was treated as family and welcomed with food and wine, feeling as if they too were coming home. In his final years, Peter earned and enjoyed the Retirement Dream. Peter's days were filled with sipping pre-dawn coffee with "the guys" at Stewart's in Perth, supporting New York's economy through numerous purchases of his daily numbers, and protecting the environment through the cultivation of a vegetable garden that grew to half the size of his property. Refusing his family's pleas to make a roadside stand, instead, Peter insisted on bestowing his bounty to friends and family who visited his home. Peter was a member of the American Legion Post 337 of Broadalbin and served his family, his community, and his country until his passing in September 2019.