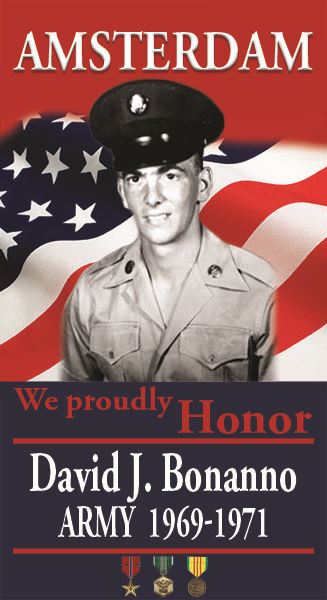 David Joseph Bonanno graduated from Amsterdam High School in 1968 and enlisted in the U.S. Army that summer. Dave trained at both Fort Dix and Fort San Antonio, where he became a Specialist 5th Class as a medic and eventually deployed to Vietnam in 1969. During his time in Vietnam, he was recognized for many high honors including 3 Bronze Stars (two with Valor and one for meritorious duty), the Army Commendation Medal, and the Vietnam Service Medal with Two Oversee Bars, among others. He was honorably discharged from the Army in 1971 where he returned home and has been a lifelong resident of the City of Amsterdam. Before his deployment, Dave was married to Kathleen Ann Billington and will have been happily married for 50 years on October 11th, 2020. He has been a lifelong enthusiast of Amsterdam sports through the support of his sons Brian, Matthew, and Thomas. The entire family is proud of Dave and is excited to recognize him for his service.