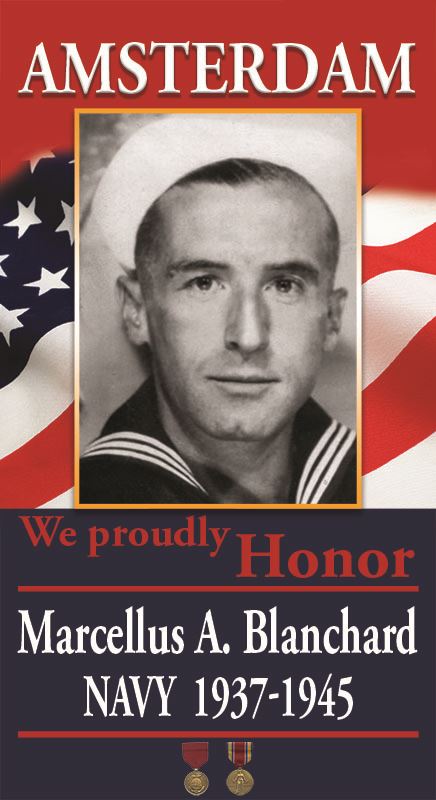 Marcellus A. (Marcy) Blanchard, was born in California in 1913 to Daniel and Frances Blanchard and started his military career in the United States Army in 1932. After his service in the Army, he joined the U.S. Navy, which was the lifetime experience of which he was most proud. He returned home on December 7, 1941, during the defense of Pearl Harbor, and thereafter was immediately called back to service in the Pacific. M. A. Blanchard was a Chief Petty Officer throughout the war in the Pacific as a gunner on warships. In 1945 at Yorktown Virginia's Naval Mine Warfare School, Marcy completed a course of study in Ammunition Handling for Shipboard Personnel. Prior to an honorable discharge, Marcy received awards including the Good Conduct Medal and the American and Victory Medal. He returned to his life in Fort Hunter, New York, married Helen A. Stock, and had two sons, who still live in the area. In the late 1940s Marcy worked on the New York State Barge Canal in maintenance, servicing the locks in Amsterdam and others in the area, then left the canal to work at General Electric for the rest of his career, retiring in 1979 after 26 years working in a variety of positions. Marcy was a member of Amsterdam's Welcome Lodge 829 F&AM and also served in the Fort Hunter Volunteer Fire Department. Marcy passed away in 1987, survived by a loving family made up of Helen, the boys, four grandchildren, and now many great-grandchildren.